Who is orphan x?

The Nowhere Man is a legendary figure spoken about only in whispers. It’s said that when he’s reached by the truly desperate and deserving, the Nowhere Man can and will do anything to protect and save them.

But he’s not merely a legend.

Evan Smoak is a man with skills, resources, and a personal mission to help those with nowhere else to turn. He’s also a man with a dangerous past. Taken from a group home at twelve, Evan was raised and trained as part of the Orphan Program, an off-the-books operation designed to create deniable intelligence assets—i.e. assassins. Evan was Orphan X. He broke with the Program, using everything he learned to disappear and reinvent himself as the Nowhere Man.

”Put Jack Reacher and Jason Bourne into a blender. Add one drop of nitro-glycerine and three of sulphuric acid. Switch on, and don’t be surprised if the lid blows off. You’ve just mixed your first Orphan X.”

”Where there’s Smoak, there’s firepower. The only thing better than a great book is a series in which each book is exponentially better than the last. It’s not a feat that can be pulled off by just any author, but it’s viscerally powerful when done right and HELLBENT is as right as it gets.[It]combines the intrigue, action and emotional wallop of the first two novels (ORPHAN X and THE NOWHERE MAN) and ratchets it up into the stratosphere of white-knuckled tension and hyperventilating action.”

"Hurwitz is a terrific thriller writer, and with this series he gets better with each installment. Amid the mayhem, he crafts a tender tale of what it truly means to be a parent and the importance of family. He also has a knack for moments of sheer fun and humor mixed with the action, making the characters believable."

"Hurwitz is a master —one of the very few —of the unexpected. The array of knowledge and talents that comprise his skill set is fully on display here, all but guaranteeing a long and successful history for this series and its primary character." 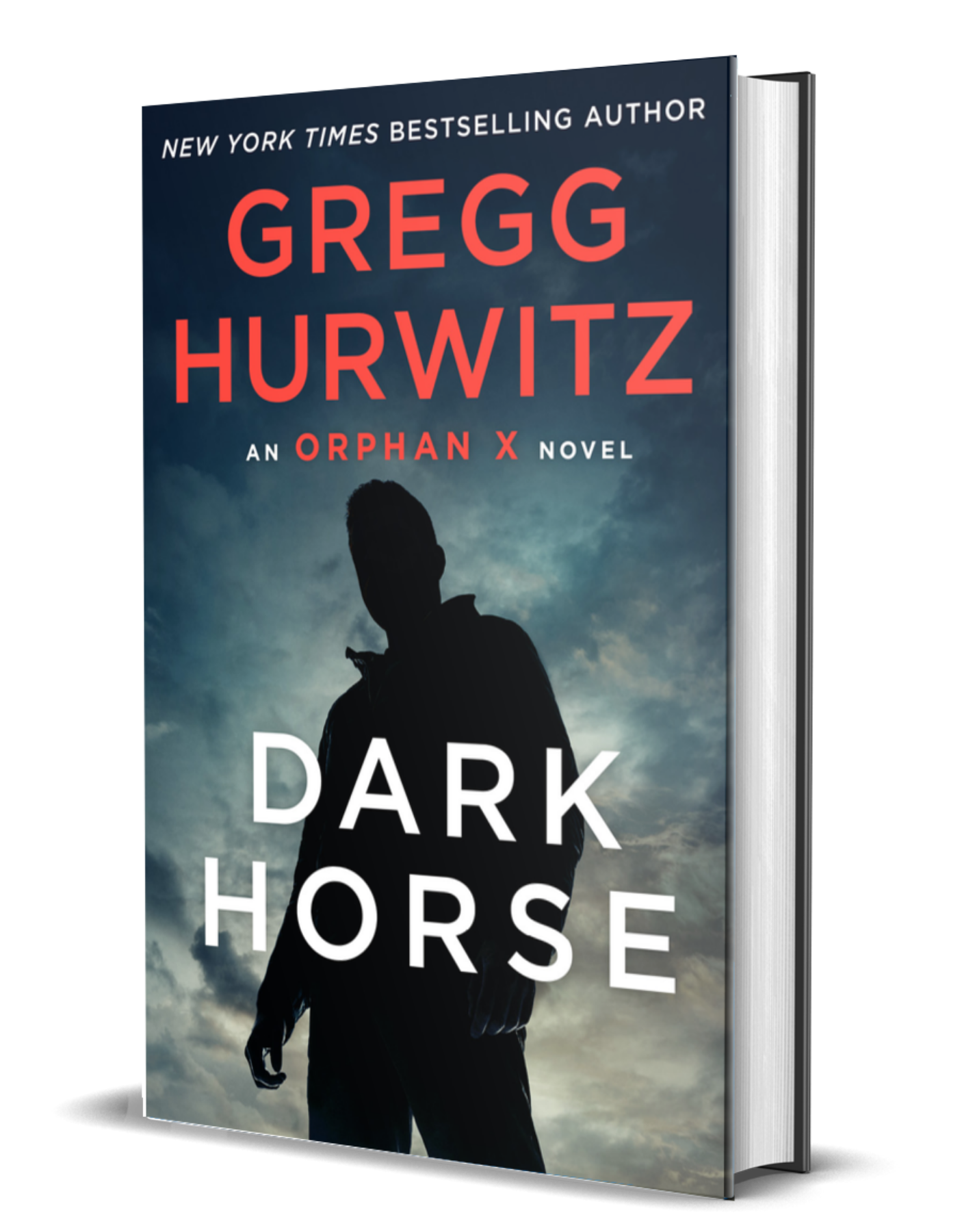 Evan Smoak is a man with many identities
and a challenging past.

As Orphan X, he was a government assassin for the off-the-books Orphan Program. After he broke with the Program, he adopted a new name and a new mission--The Nowhere Man, helping the most desperate in their times of trouble. Having just survived an attack on his life, and the complete devastation of his base of operations, as well as his complicated (and deepening) relationship with his neighbor Mia Hall, Evan isn't interested in taking on a new mission. But one finds him anyway.

Aragon Urrea is a kingpin of a major drug-dealing operation in South Texas. He's also the patron of the local area--supplying employment in legitimate operations, providing help to the helpless, rough justice to the downtrodden, and a future to a people normally with little hope. He's complicated--a not completely good man, who does bad things for often good reasons. However, for all his money and power, he is helpless when one of the most vicious cartels kidnaps his innocent eighteen year old daughter, spiriting her away into the armored complex that is their headquarters in Mexico. With no other way to rescue his daughter, he turns to The Nowhere Man.

Now not only must Evan figure out how to get into the impregnible fortress of a heavily armed, deeply paranoid cartel leader, but he must decide if he should help a very bad man--no matter how just the cause.

Forced into retirement, Evan Smoak gets an urgent request for help from someone he didn't even suspect existed.

As a boy, Evan Smoak was pulled out of a foster home and trained in an off-the-books operation known as the Orphan Program. He was a government assassin, perhaps the best, known to a few insiders as Orphan X. He eventually broke with the Program and adopted a new name – The Nowhere Man―and a new mission, helping the most desperate in their times of trouble. But the highest power in the country has made him a tempting offer - in exchange for an unofficial pardon, he must stop his clandestine activities as The Nowhere Man. Now Evan has to do the one thing he’s least equipped to do – live a normal life.

But then he gets a call for help from the one person he never expected. A woman claiming to have given him up for adoption, a woman he never knew – his mother. Her unlikely request: help Andrew Duran – a man whose life has gone off the rails, who was in the wrong place at the wrong time, bringing him to the deadly attention of very powerful figures. Now a brutal brother & sister assassination team are after him and with no one to turn to, and no safe place to hide, Evan is Duran’s only option. But when the hidden cabal catches on to what Evan is doing, everything he’s fought for is on the line– including his own life. 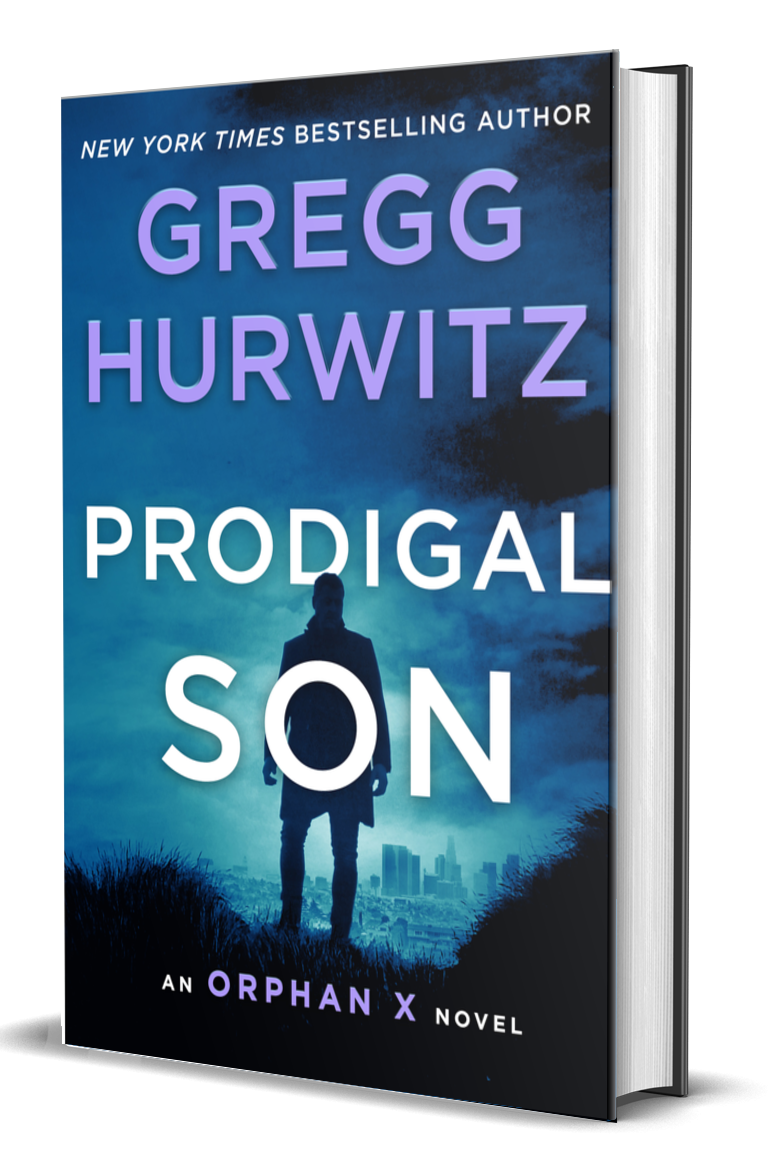 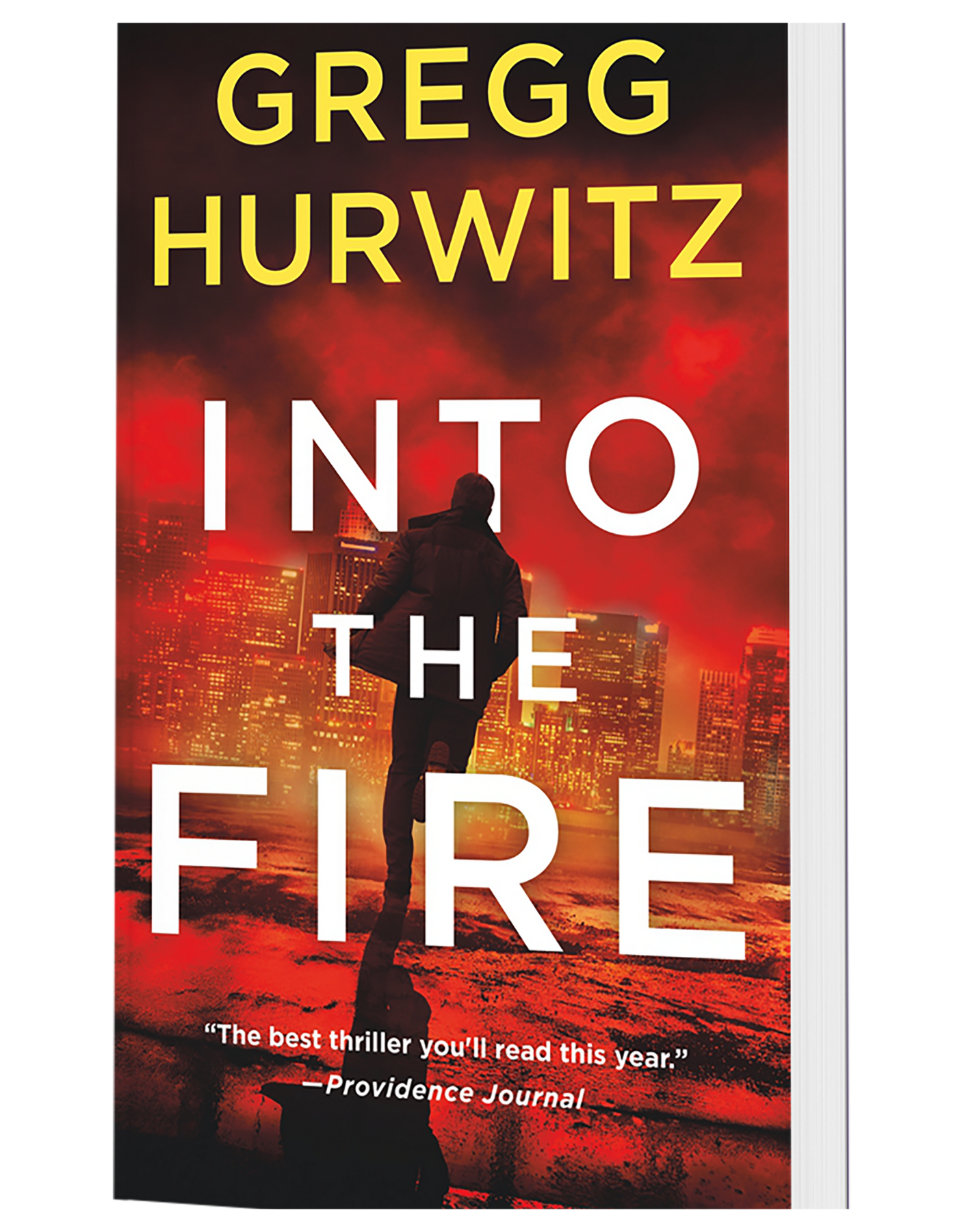 Evan Smoak lives by his own code. Trained as an off-the-books government assassin they named Orphan X, he broke with the program and reinvented himself as The Nowhere Man, a figure hidden in the shadows who helps the truly desperate. Now, free of the Program for good, he turns to a dangerously uncertain future…

Max Merriweather’s at the end of his rope. His cousin’s been brutally murdered, leaving Max an envelope that contains nothing but a mysterious key. It seems a simple enough case for The Nowhere Man to unlock. But behind each threat he takes out, a deadlier one emerges—until it’s clear that they’re facing a city-wide terror and a mission that requires Evan Smoak to put himself at more risk than he’s ever faced before as he’s sent out of the dark and INTO THE FIRE.

Out of the Dark

Someone at the very highest level of government has been trying to eliminate every trace of the Orphan Program by killing all the remaining Orphans and their trainers. After Evan’s mentor and the only father he ever knew was killed, he decided to strike back. His target is the man who started the Program and who is now the most heavily guarded person in the world: the President of the United States.

But President Bennett knows that Orphan X is after him and, using weapons of his own, he’s decided to counter-attack. Bennett activates the one man who has the skills and experience to track down and take out Orphan X—the first recruit of the Program, Orphan A.

With Evan devoting all his skills, resources, and intelligence to find a way through the layers of security that surround the President, suddenly he also has to protect himself against the deadliest of opponents. It’s Orphan vs. Orphan with the future of the country—even the world—on the line. 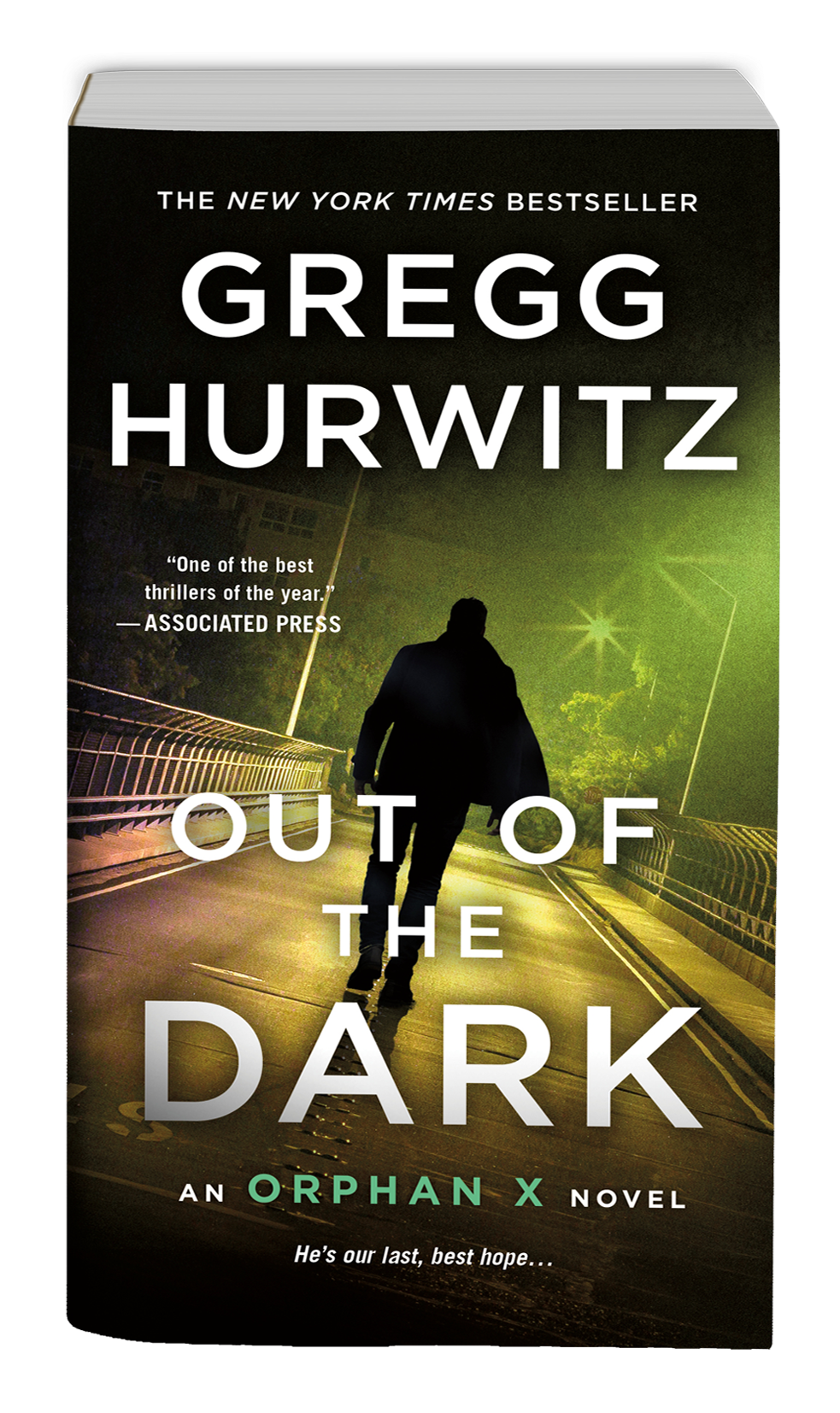 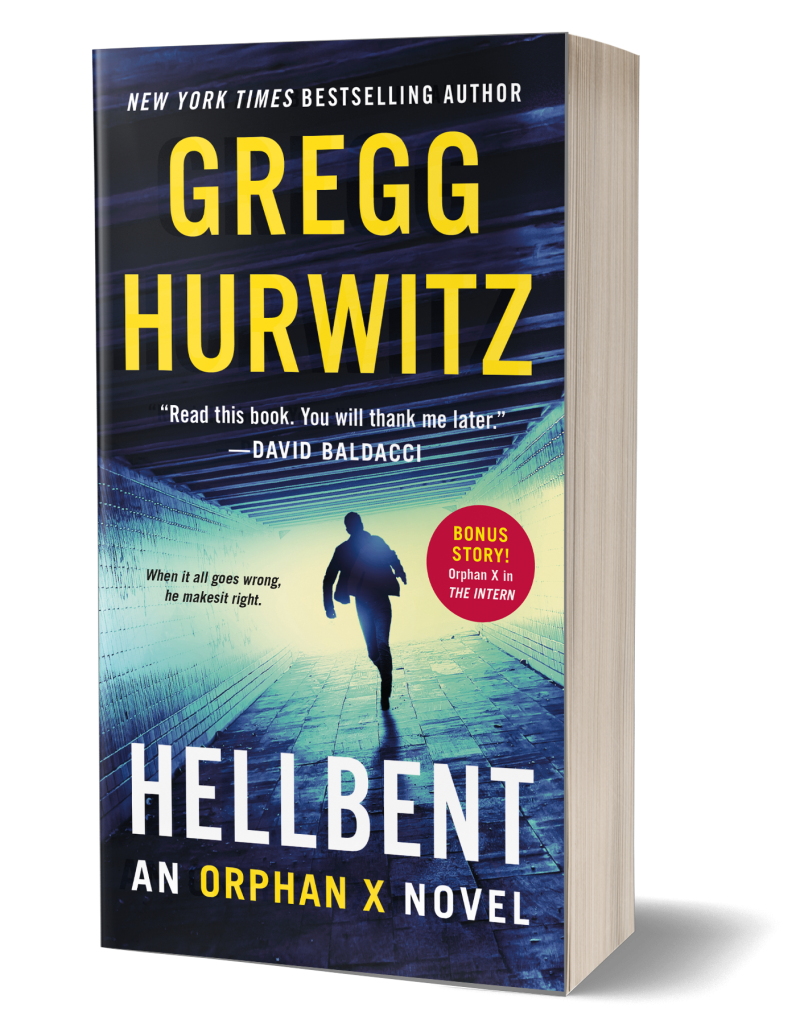 Taken from a group home at age twelve, Evan Smoak was raised and trained as an off-the-books government assassin: Orphan X. After he broke with the Orphan Program, Evan disappeared and reinvented himself as the Nowhere Man, a man spoken about only in whispers and dedicated to helping the truly desperate.

But this time, the voice on the other end is Jack Johns, the man who raised and trained him, the only father Evan has ever known. Secret government forces are busy trying to scrub the remaining assets and traces of the Orphan Program and they have finally tracked down Jack. With little time remaining, Jack gives Evan his last assignment: find and protect his last protégé and recruit for the program.

But Evan isn’t the only one after this last Orphan—the new head of the Orphan Program, Van Sciver, is mustering all the assets at his disposal to take out both Evan (Orphan X) and the target he is trying to protect.

Evan Smoak’s new life is interrupted when a surprise attack comes from an unlikely angle and Evan is caught unaware. Captured, drugged, and spirited off to a remote location, he finds himself heavily guarded and cut off from everything he knows. His captors think they have him trapped and helpless in a virtual cage but they don’t know who they’re dealing with—or that they’ve trapped themselves inside that cage with one of the deadliest and most resourceful men on earth. 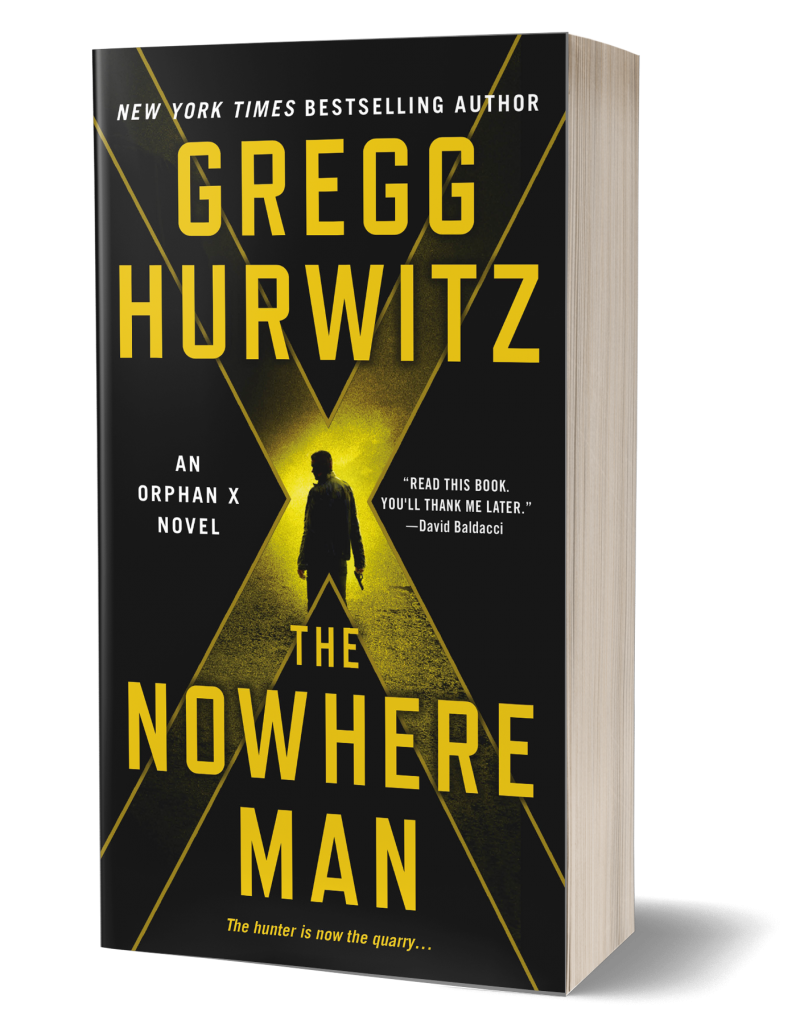 Someone is on Evan Smoak’s tail. Someone with similar skills and training. Someone who knows Orphan X. Someone who is getting closer and closer. And will exploit Evan’s weakness—his work as The Nowhere Man—to find him and eliminate him. Grabbing the reader from the very first page, Orphan X is a masterful thriller, the first in Gregg Hurwitz’s electrifying new series featuring Evan Smoak. 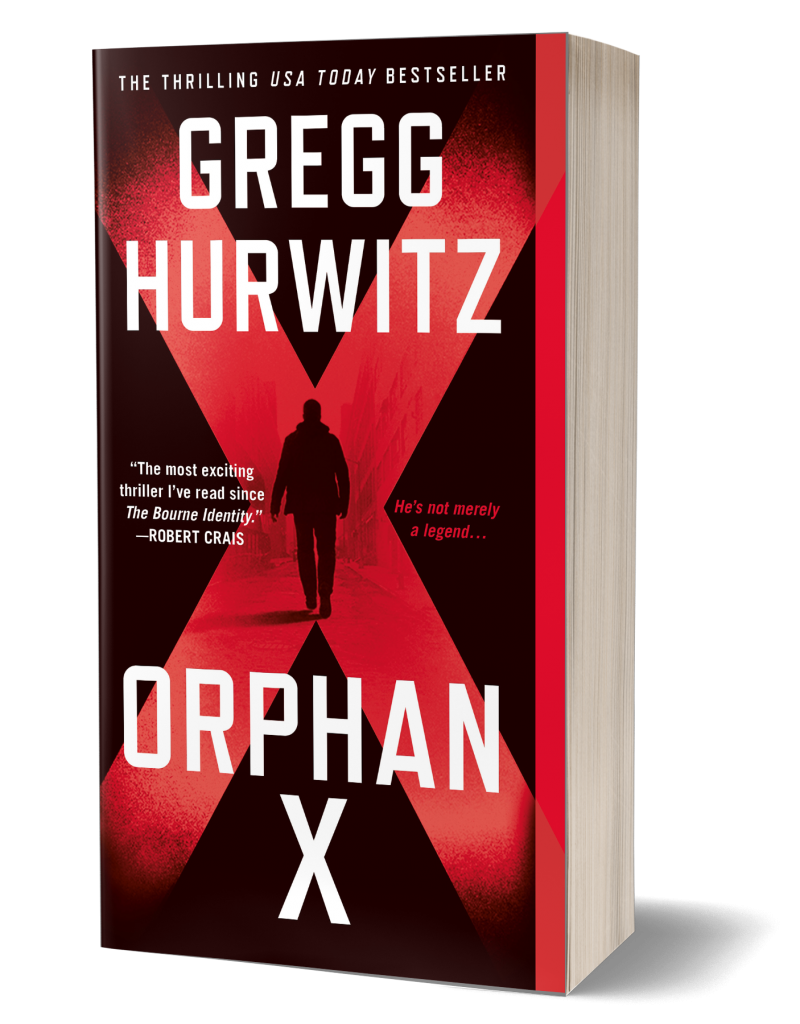 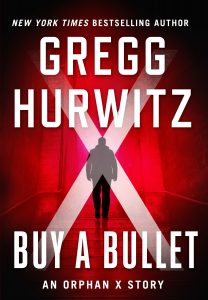 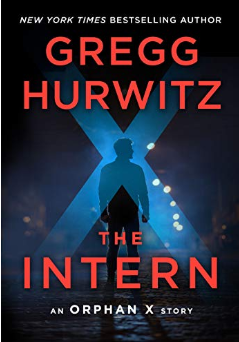 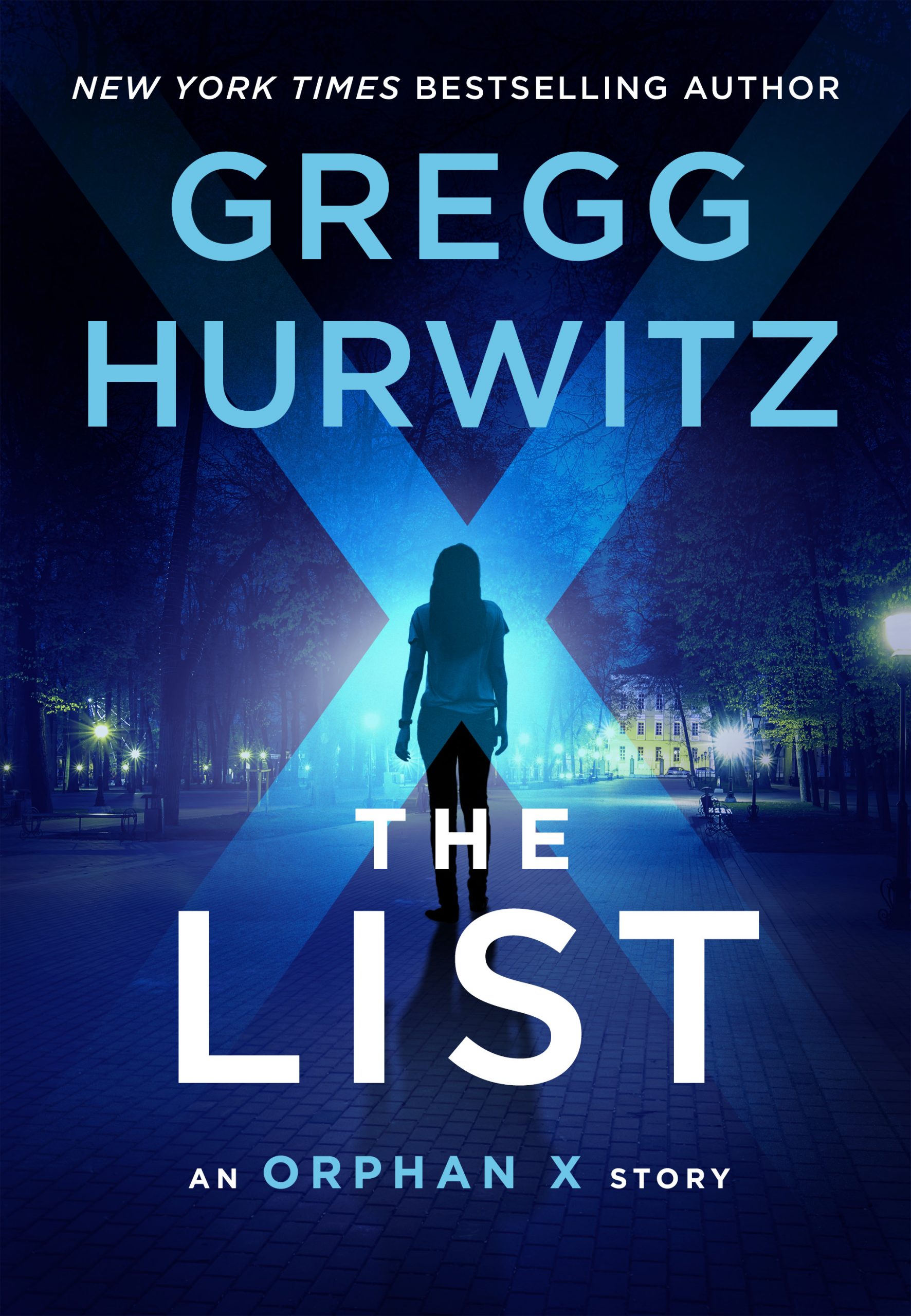 Listen to a redacted chapter read by Scott Brick:

Led by Gregg, and joined by Marshall Herskovitz, Laeta Kalogridis, Billy Ray and Shawn Ryan, the team of five screenwriters spearheaded the creation of $1B worth of digital content for free. Details here.